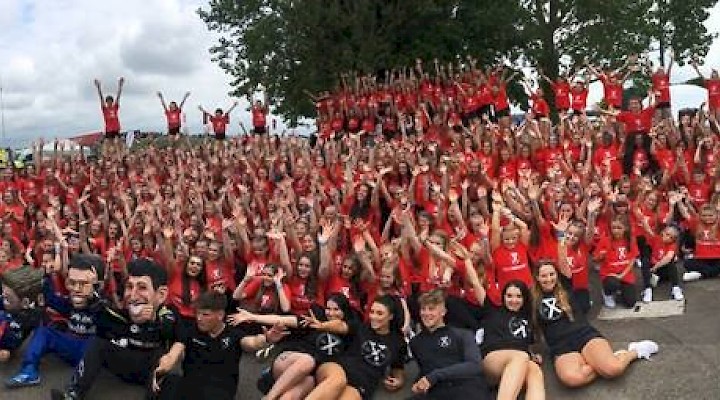 60 HG students faced an intense professional 3 day rehearsal in preparation for their pole performance in the opening of the F1 Rolex Grand Prix at Silverstone this weekend. A bright early start on Saturday with glitter, face paint and hair dos at the ready.

The team had a smooth journey and fast track entry into the rehearsal zone where they received performance t-shirts and the props were issued, a variety of multi-coloured large flags....the butterflies started! They were based next to Craig David’s dressing room but his management team kept them at arm’s length, can't think why!

HG were the third school on to the track and had to be marshalled through the crowds to take start positions. They watched the Blades air display and then the music started, 2000 students performed a 7 minute routine to Michael Jackson, Lady Gaga and the Greatest Showman. The atmosphere was electric, the students had so much joy performing the choreography, they didn't want it to end! It was so inspiring to see them in their element.

After a photo shoot with the other 34 schools and the Pro-Excel team the team found prime position along the Wellington straight, farm curve and loop in the entertainment area. Students, Mrs Howard, Mr Joyce and Mr Ayling enjoyed free activities including, rock climbing, zorbing, the Segway experience, army tank viewing and the drivers experience.

A BIG thank you to all staff, parents, friends and family that watched the final rehearsal, attended the event day and supported this trip.